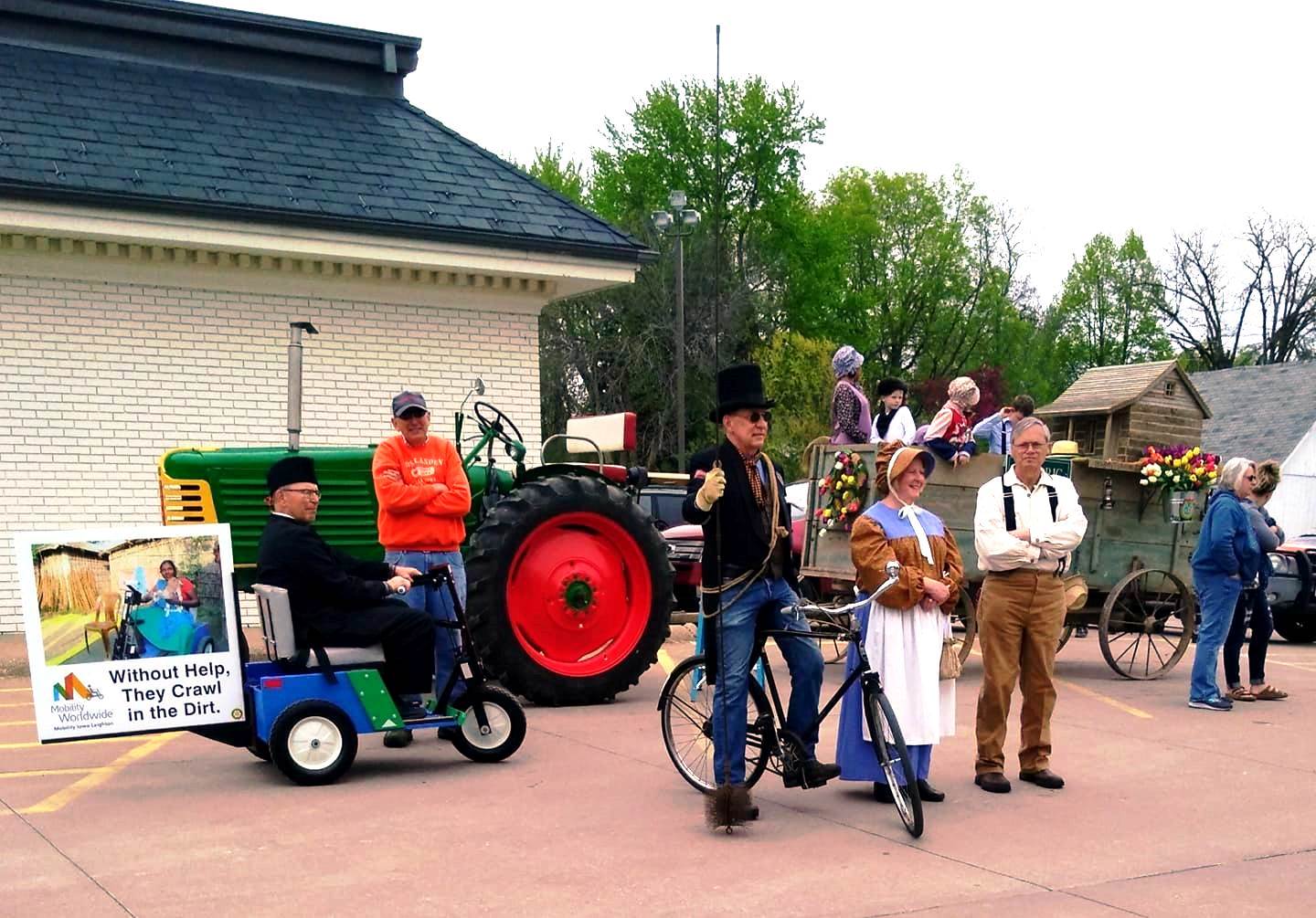 A replica of the Tuttle Cabin on top of an authentic Buerken’s wagon is featured in each Tulip Time parade. Thank you to Duane Rempe for letting us use his antique wagon that was built in Pella, Iowa at the Buerken’s wagon factory.

Standing at the Parade Line up were several members from Historic Pella Trust; President Bob Zylstra on the PET’s mobility cart, in the orange shirt leaning on the tractor is Board member Duane Rempe. The Beurken’s wagon belongs to Duane and we appreciate the use of it very much. On the bike is chimney sweep and board member Bruce Haustine. Beside Bruce is his sister and brother in law, Karen and Bob Godley. The Godley’s helped the trust by playing the Tuttle’s both at the Tuttle Cabin and during the parades. 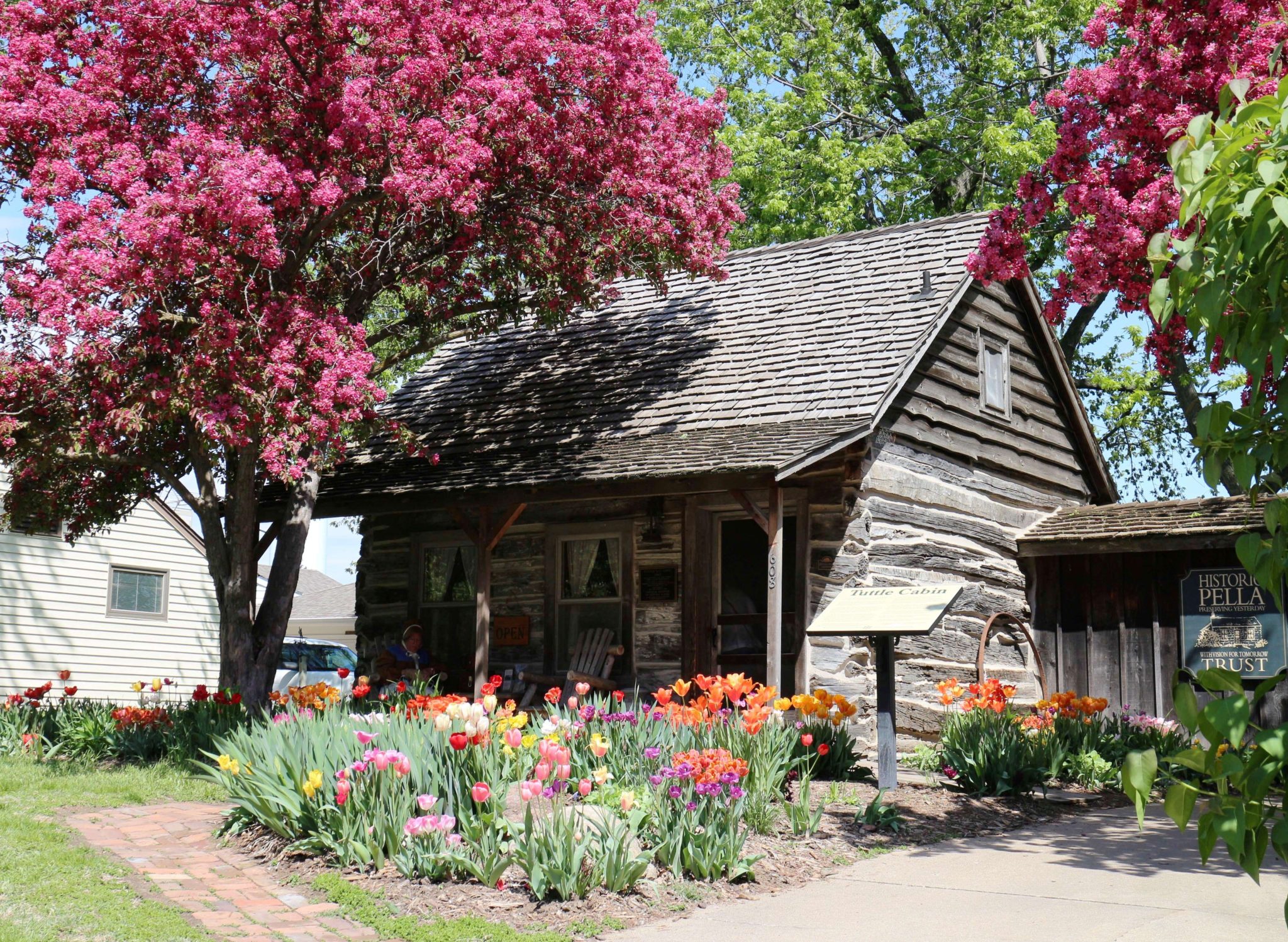 The Tuttle Log cabin, believed to be the oldest existing building in Marion County, is named after Pella’s pioneer family.

After being in private hands these many years the cabin was purchased in 2015 by the Historic Pella Trust – a non-profit preservation group. It serves as the office for Historic Pella Trust and is open for tours during Tulip Time or by appointment and various times throughout the summer months.

The Tuttle Log Home is located at 608 Lincoln Street. It is within easy walking distance of downtown Pella and adjacent to beautiful Sunken Garden Park. To visit the cabin travel two blocks north of the northeast corner of Central Park on Main Street. Turn right on Lincoln Street and the cabin is one-half block ahead on the left hand side of the street.

On Friday there were special guests riding the wagon in the afternoon and walking with it during the evening parade.  Family members of  the late Gail Kirby, the previous owner of the historic Tuttle cabin, participated in her honor.

Gail’s father, Robert (Bob) VanVark purchased the cabin at auction in the early 1970’s after Mrs. Sneller passed away in 1971. The Cabin had been in the Sneller family since 1917. Gail advocated for the preservation of the historic cabin and it became her home. The VanVarks poured a new basement at the back of the lot and relocated the cabin from the front of the lot onto the new foundation. A detailed study was done and it was declared a historic landmark.

Cody KIrby’s family walked with the wagon in the parade Friday evening as the Tuttle family pioneers in honor of their Mom and Grandfather who decided to preserve the 1843 cabin for future generations to enjoy. 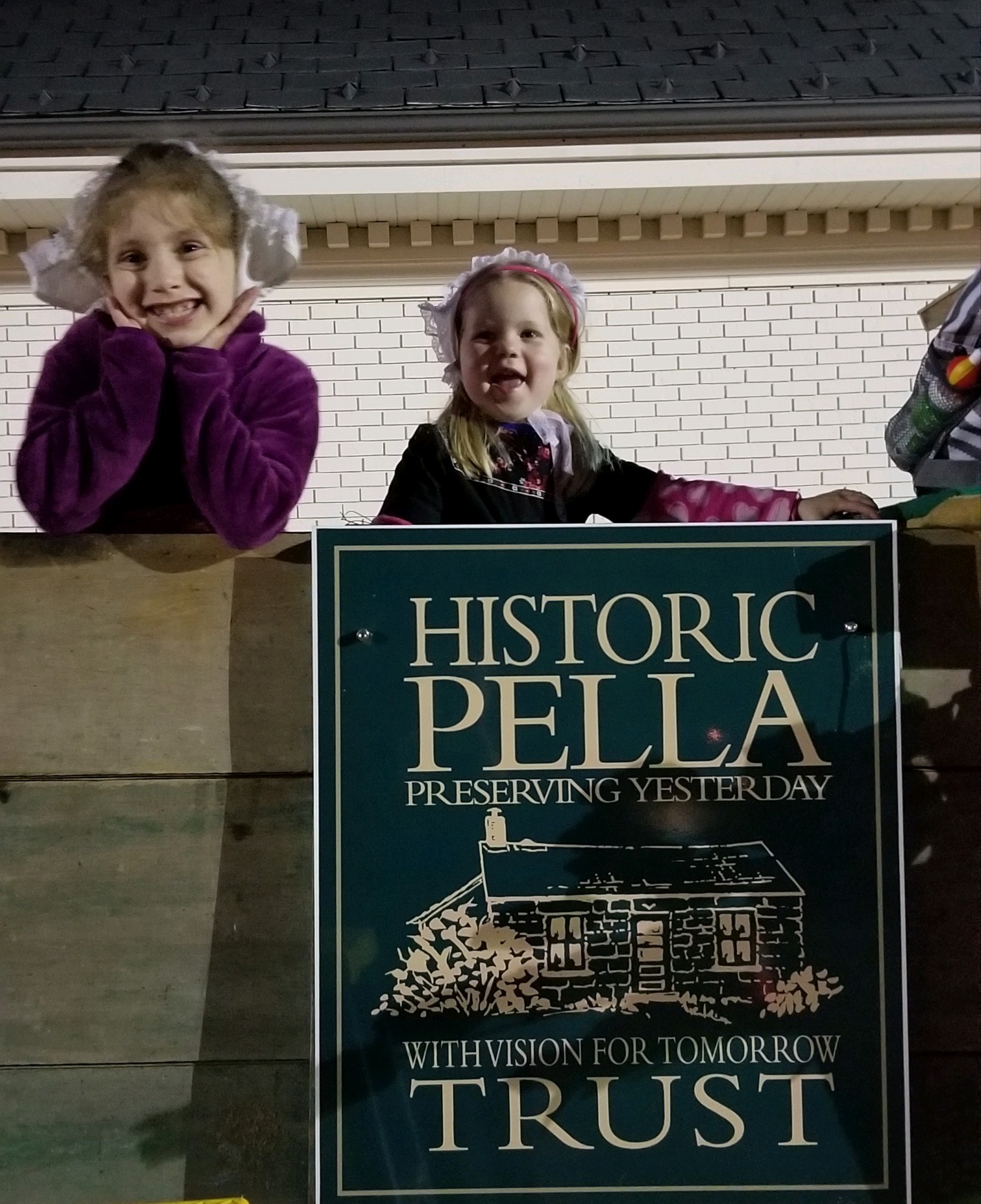 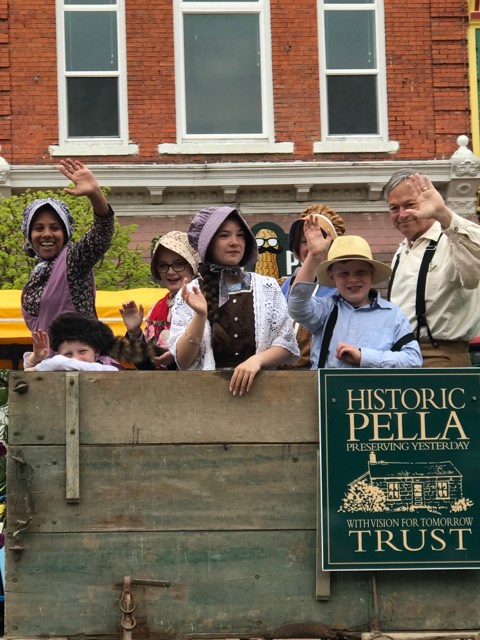 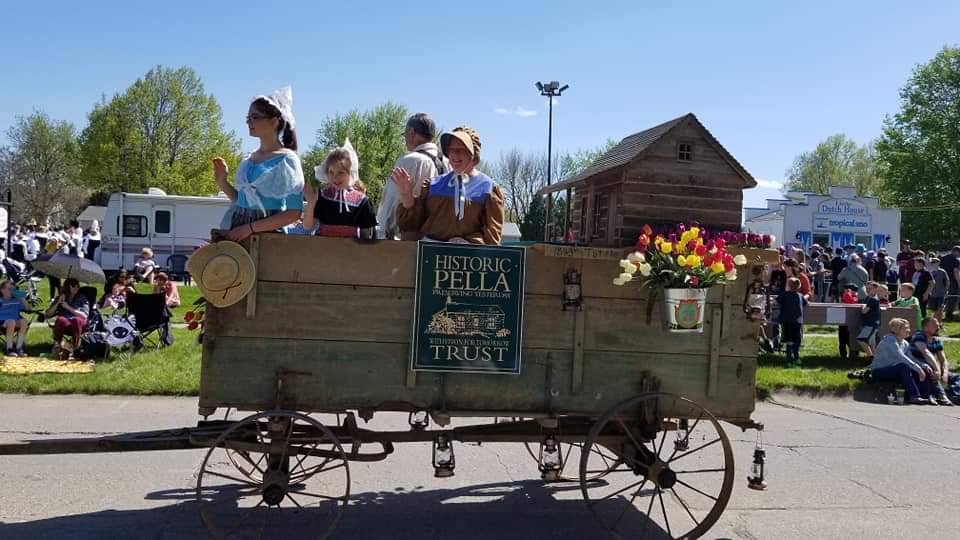 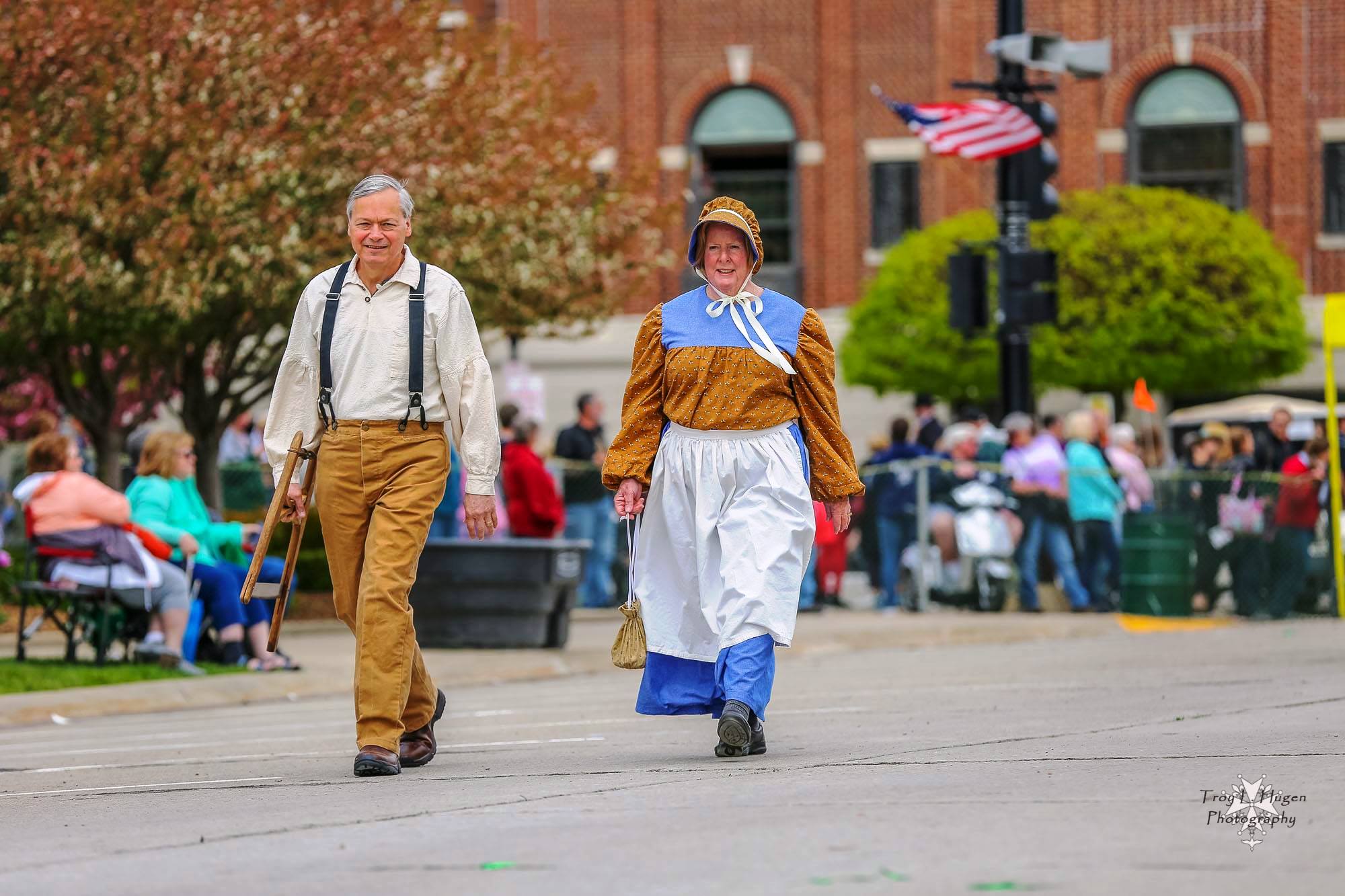 Bob and Karen Godley were visiting their relatives in Pella during Tulip Time with the intention of helping HPT bring history alive by representing Thomas and Nancy Tuttle both at the Tuttle Cabin and in the parades. The Godley’s live in Oregon. 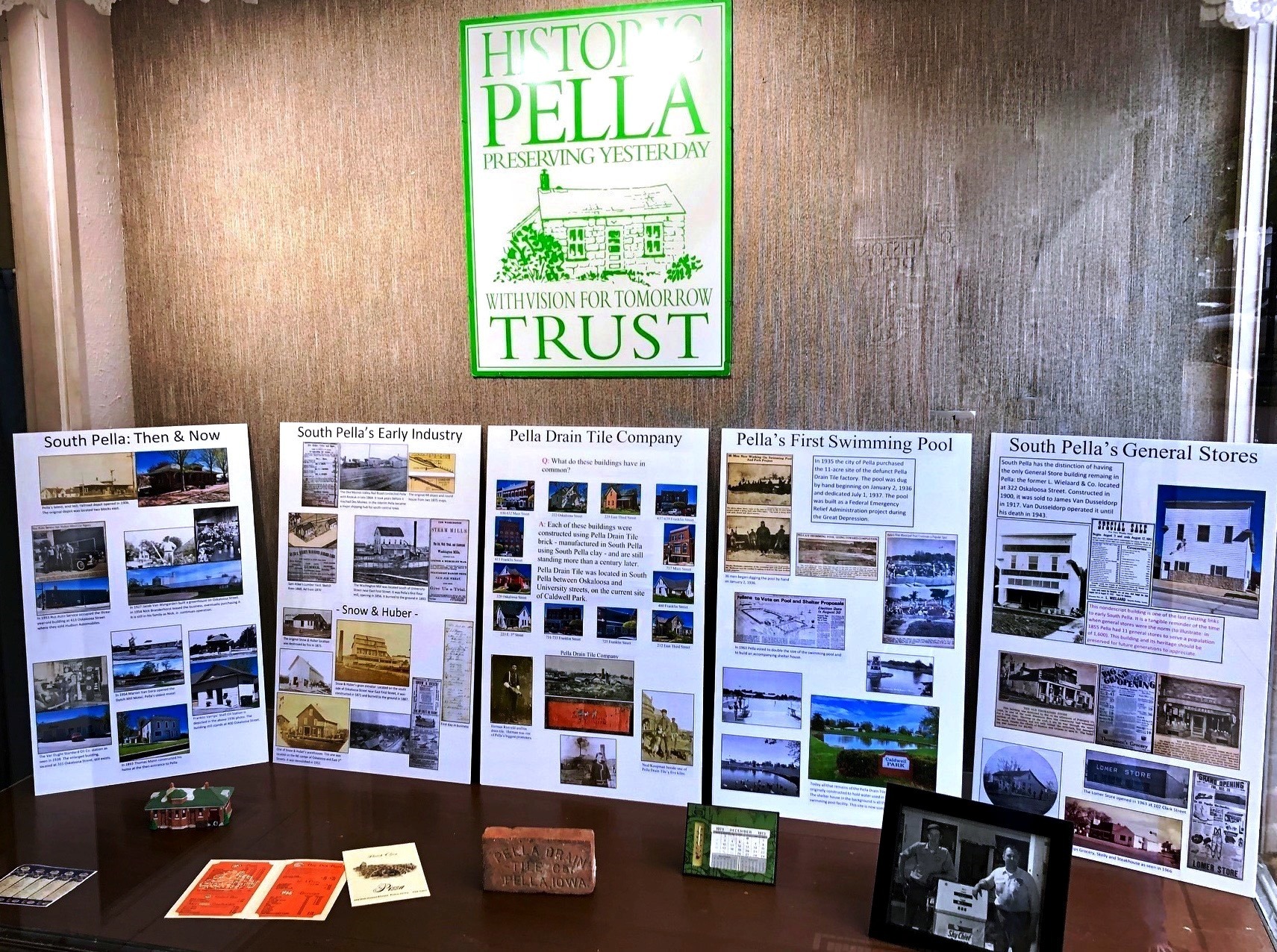 During the month of May please look for our display in the Pella Chronicle window on the east side of the square at 812 Main Street. As the city of Pella works to update the Oskaloosa Street corridor in South Pella we strive to provide vital context for this historic area. Our display is filled with vintage photos and little known facts of South Pella. Our goal is to preserve South Pella’s unique heritage for future generations. 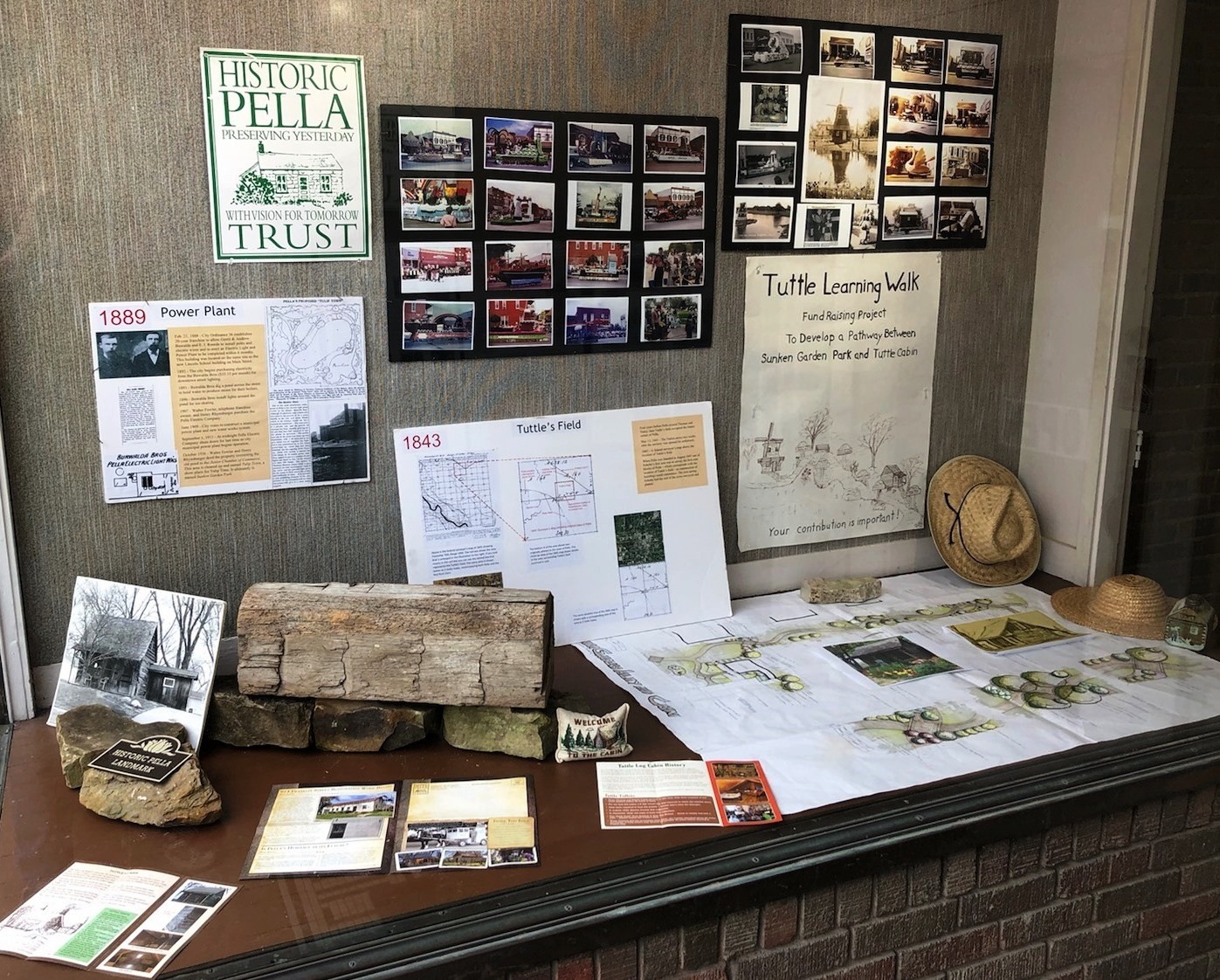 Visitors will find something new next year!

The Historic Pella Trust in partnership with the City of Pella is designing the Tuttle Learning Walk which will be located on the west side of Tuttle Cabin and lead north to Sunken Garden Park and its historic windmill. This meandering walkway will feature signage with information on early Pella history.

On May 13, 1843, less than two weeks after the territory opened for settlement, 35-year-old Thomas Tuttle and Nancy, his 21-year-old wife, arrived at the site of what would later become the city of Pella. For four years Thomas and Nancy struggled to break the thick prairie sod, slowly taming the wilderness and turning it into their farm. At first the Tuttles were alone in their struggles – they had no children and were not aware of another settler within a 20-mile radius. They labored long hours building shelter, hunting for food and farming the land. Until their first shelter was livable they slept beneath their wagon. When supplies ran low Thomas had to make a nine-day round-trip to Fort Madison on the Mississippi River to restock. During those trips Nancy remained behind to guard the farm.   Fortunately it wasn’t too long before other families started moving into the area. Within a few years there were several new farms – the closest being less than a mile to the west.

One day in the summer of 1847 a delegation of five Dutchmen arrived at the Tuttle’s cabin with an offer to purchase their farm. One of those Hollanders was Dominie Henry P. Scholte who was the leader of some 900 new emigrants from the Netherlands. Due to religious and economic conflicts in their homeland they were looking for a place to start a new life. In less than a week the Scholte delegation purchased farms and land totaling nearly 30 square miles from a number of settlers, including the Tuttles, in what was newly-formed Marion County.

Scholte had special plans for the Tuttle farm, which he had personally purchased. Within weeks the Scholte-hired county surveyor had finished platting the first nine blocks of Pella – located directly on top of the Tuttle’s field. Those nine blocks form what are now Central Park and the eight blocks surrounding it. The Tuttles didn’t know it at the time, but when they broke the prairie they were also clearing the way for downtown Pella. The Tuttle’s dwelling was the first home in Pella. 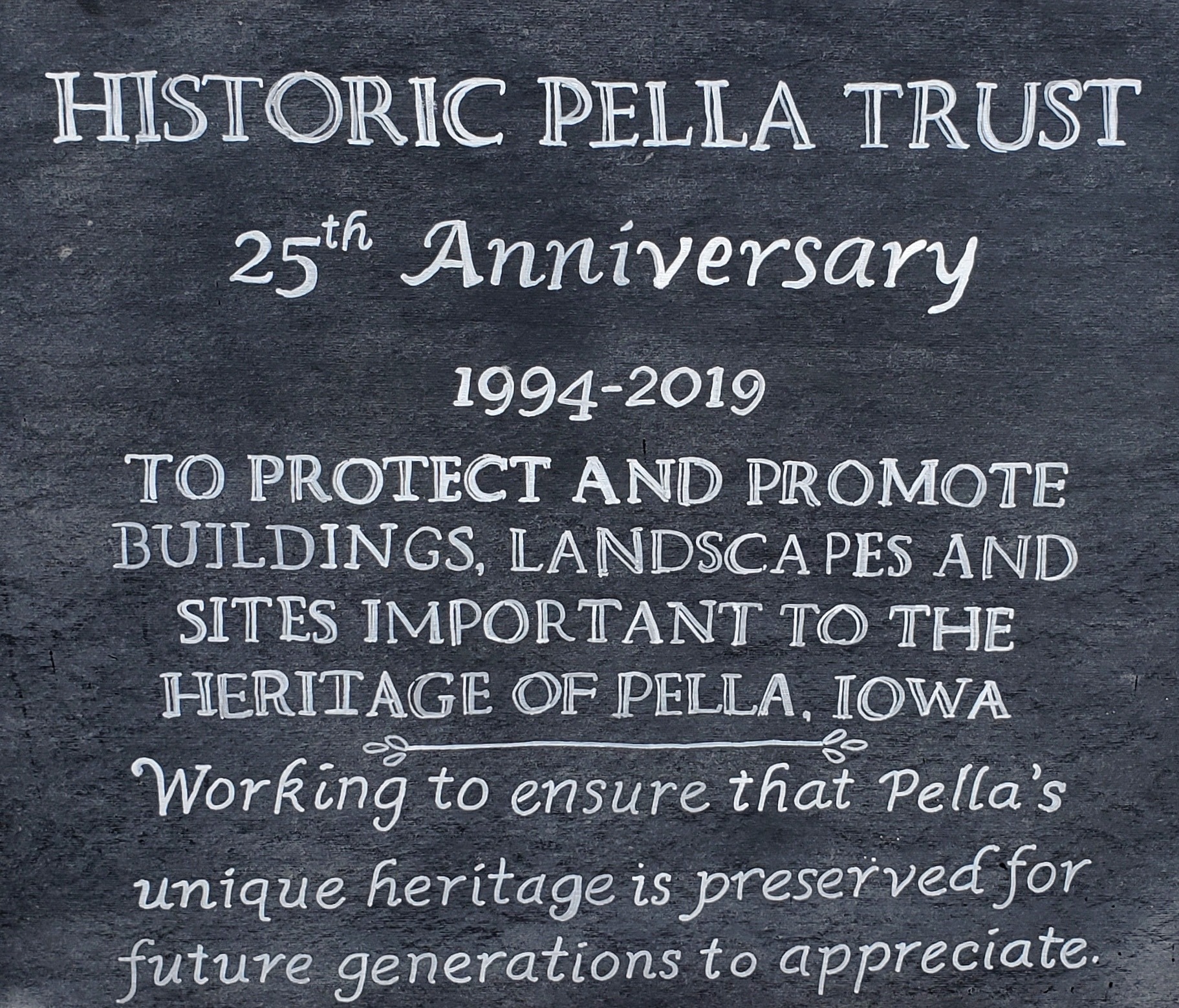