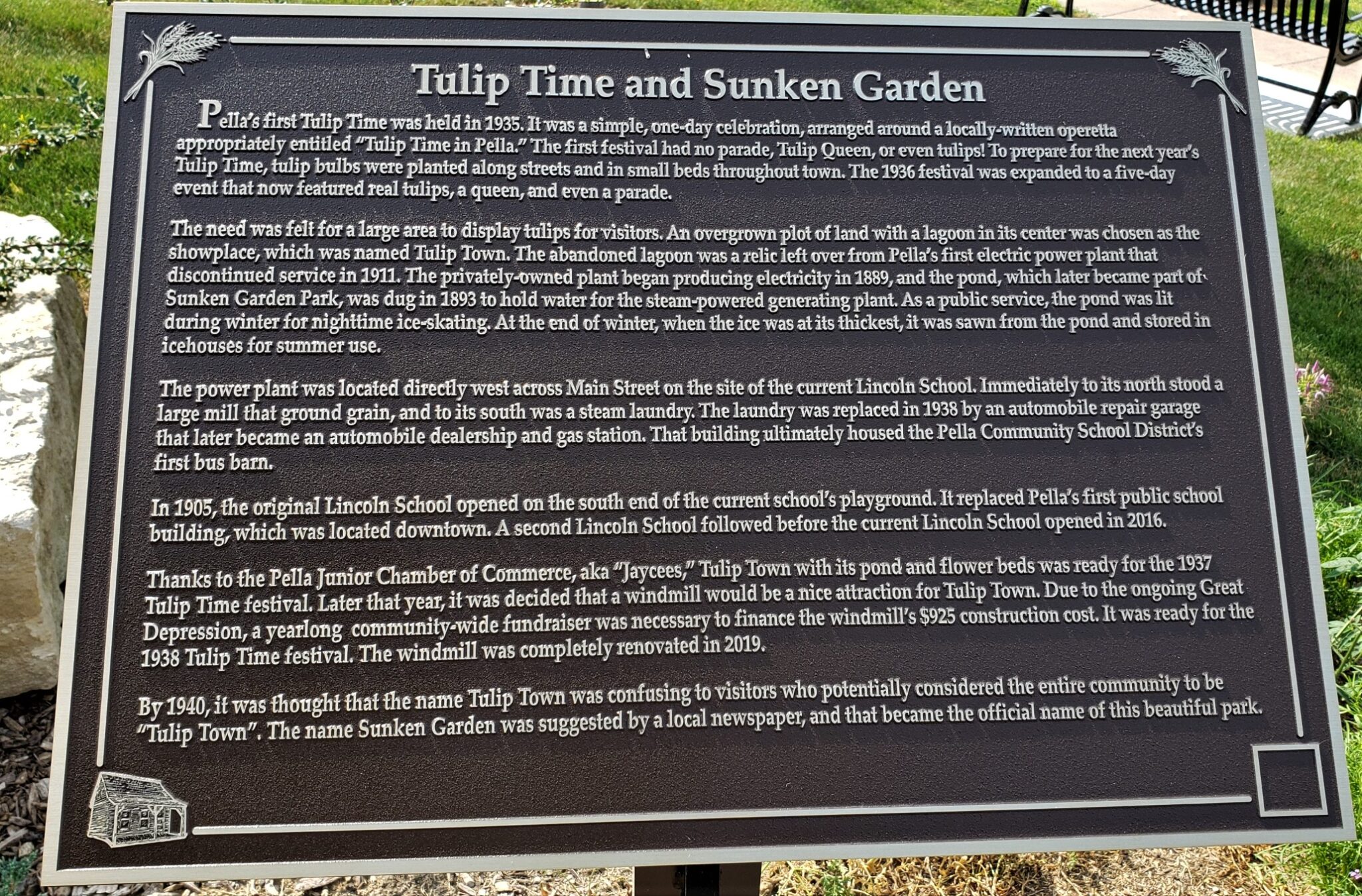 Pella’s first Tulip Time was held in 1935. It was a simple, one-day celebration, arranged around a locally-written operetta appropriately entitled “Tulip Time in Pella.” The first festival had no parade, Tulip Queen, or even tulips! To prepare for the next year’s Tulip Time, tulip bulbs were planted along streets and in small beds throughout town. The 1936 festival was expanded to a five-day event that now featured real tulips, a queen, and even a parade.

The need was felt for a large area to display tulips for visitors. An overgrown plot of land with a lagoon in its center was chosen as the showplace, which was named Tulip Town. The abandoned lagoon was a relic left over from Pella’s first electric power plant that discontinued service in 1911. The privately-owned plant began producing electricity in 1889, and the pond, which later became part of Sunken Garden Park, was dug in 1893 to hold water for the steam-powered generating plant. As a public service, the pond was lit during winter for nighttime ice-skating. At the end of winter, when the ice was at its thickest, it was sawn from the pond and stored in icehouses for summer use.

The power plant was located directly west across Main Street on the site of the current Lincoln School. Immediately to its north stood a large mill that ground grain, and to its south was a steam laundry. The laundry was replaced in 1938 by an automobile repair garage that later became an automobile dealership and gas station. That building ultimately housed the Pella Community School District’s first bus barn.

Thanks to the Pella Junior Chamber of Commerce, aka “Jaycees,” Tulip Town with its pond and flower beds was ready for the 1937 Tulip Time festival. Later that year, it was decided that a windmill would be a nice attraction for Tulip Town. Due to the ongoing Great Depression, a yearlong, community-wide fundraiser was necessary to finance the windmill’s $925 construction cost. It was ready for the 1938 Tulip Time festival. The windmill was completely renovated in 2019.

By 1940, it was thought that the name Tulip Town was confusing to visitors who potentially considered the entire community to be “Tulip Town”. The name Sunken Garden was suggested by a local newspaper, and that became the official name of this beautiful park.