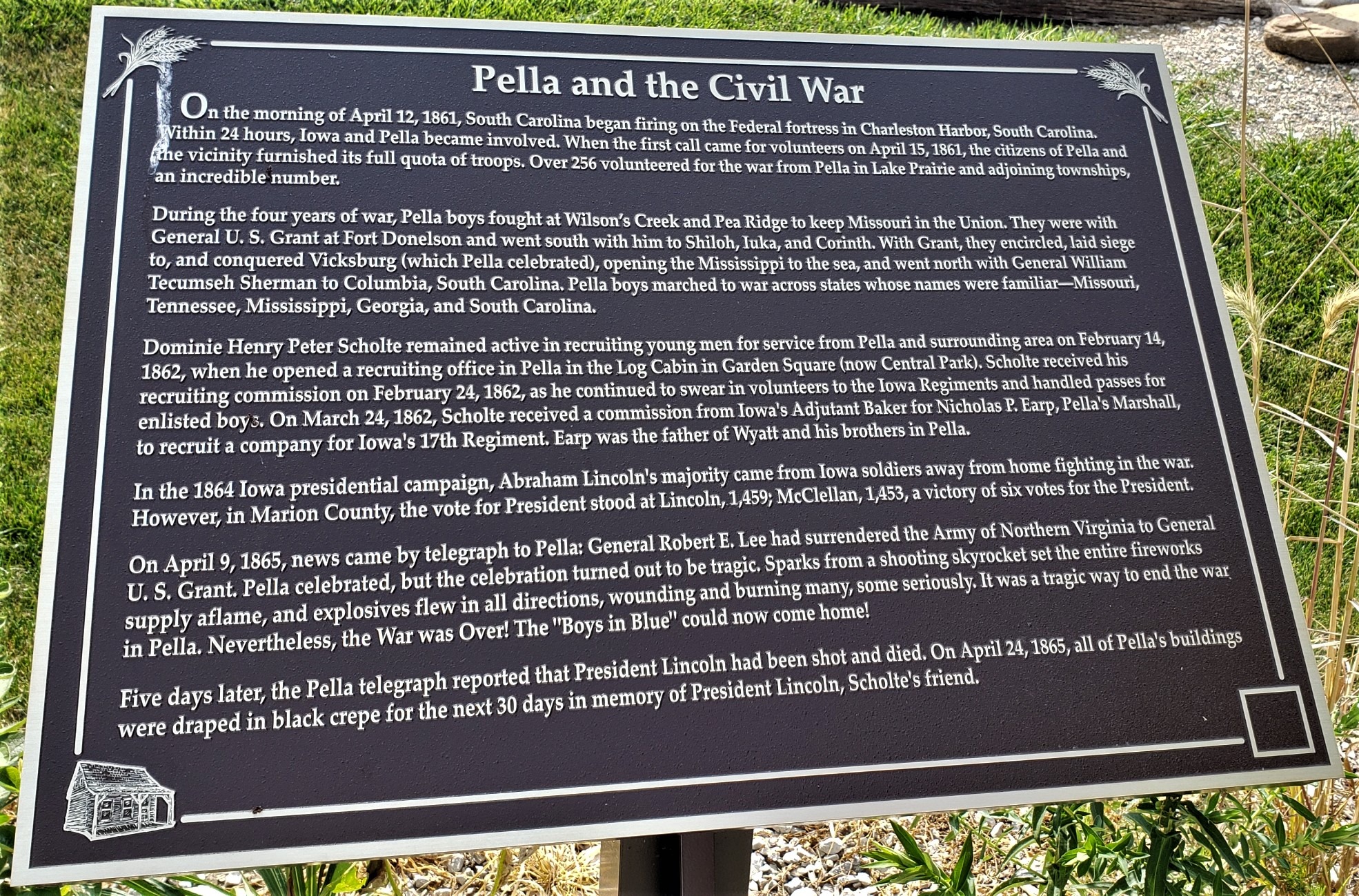 On the morning of April 12,1861, South Carolina began firing on the Federal fortress in Charleston Harbor, South Carolina. Within 24 hours, Iowa and Pella became involved.

When the first call came for volunteers on April 15,1861, the citizens of Pella and Marion County and vicinity furnished its full quota of troops. Over 256 volunteered for the war from Pella in Lake Prairie and adjoining townships, an incredible number.

During the four years of war, Pella boys fought at Wilson’s Creek and Pea Ridge to keep Missouri in the Union. They were with General U. S. Grant at Fort Donelson and went south with him to Shiloh, luka, and Corinth. With Grant, they encircled, laid siege to, and conquered Vicksburg (which Pella celebrated), opening the Mississippi to the sea, and went north with General William Tecumseh Sherman to Columbia, South Carolina. Pella boys marched to war across states whose names were familiar—Missouri, Tennessee, Mississippi, Georgia, and South Carolina.

Dominie Hendrik Peter Scholte remained active in recruiting young men for service from Pella and surrounding area on February 24, 1862, when he opened a recruiting office in Pella in the Log Cabin in Garden Square (now Central Park). Scholte received his recruiting commission on February 24, 1862, as he continued to swear in volunteers to the Iowa Regiments and handled passes for enlisted boys. On March 24,1862, Scholte received a commission from Iowa’s Adjutant Baker for Nicholas P. Earp, Pella’s Marshall, to recruit a company for Iowa’s 17th Regiment. Earp was the father of Wyatt and his brothers in Pella.

In the 1864 Iowa presidential Campaign, Abraham Lincoln’s majority came from Iowa soldiers away from home fighting in the war. However, in Marion County, the vote for President stood at Lincoln, 1,459; McClellan, 1,453, a victory of six votes for the President.

On April 9, 1865, news came by telegraph to Pella: General Robert E. Lee had surrendered the Army of Northern Virginia to General Grant. Pella celebrated, but the celebration turned out to be tragic. Sparks from a shooting skyrocket set the entire fireworks supply aflame, and explosives flew in all directions, wounding and burning many, some seriously. It was a tragic way to end the war in Pella.

Five days later, the Pella telegraph reported that President Lincoln had been shot and died. On April 24, 1865, all of Pella’s buildings were draped in black crepe for the next 30 days in memory of President Lincoln, Scholte’s friend.

The War was Over! The “Boys in Blue” could now come home to Pella!