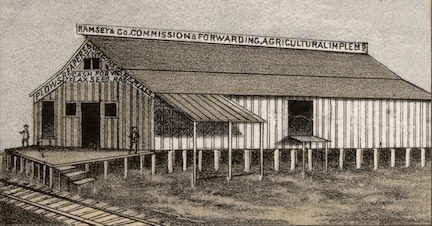 Ramsey & Co., the second Commission, Forwarding and Agricultural Implement dealer in South Pella. Ramsey’s was later taken over by Snow & Huber. Sketch from the 1869 Birds Eye View of Pella. 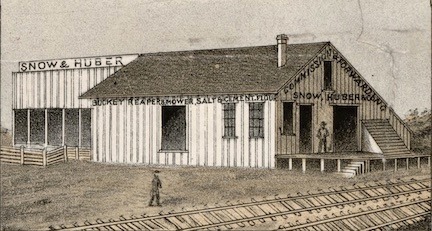 The original Snow & Huber location, east and south of today’s Heritage Lace location on South Street. Sketch from the 1869 Birds Eye View of Pella. These facilities burned in 1871

South Pella’s Amazing Boomtown Days: When the Des Moines Valley Rail Road arrived in 1864 South Pella experienced explosive growth, the likes of which Pella has not seen before or since (recall that at that time South Pella was the terminus of the DMVR). One iconic, early Pella firm that dominated Pella business like few others, was waiting for the railroad to arrive, having started operations on December 21, 1864, exactly one week prior to the first passenger train steaming into Pella. David Huber and Charles Snow combined to form the business of Snow & Huber. They were termed “Commission and Forwarding Agents”, but that didn’t begin to tell the story.

Snow & Huber not only handled the logistics of shipping and storage of freight for regional merchants, they also bought, stored and sold enormous amounts of commodities and produce from farmers. Their office and warehouses were initially located along the railroad tracks east of the depot. Records of their first few months in business show merchants traveling to Pella from Red Rock, Bennington, Pleasantville, Peoria, Knoxville, Wheeling, Monroe, Prairie City, Galesburg, Hartford, Des Moines, Indianola and even Winterset, to procure their merchandise shipped here via the railroad.

According to an early ad, Snow & Huber carried salt, cement, lime, wagons, buggies and sleighs. They had a huge assortment of agricultural implements and a large lumber yard that featured siding, fencing, flooring, shingles, lath, doors and windows. Snow & Huber also purchased wheat, rye, oats, corn, buckwheat, butter, eggs, rags, hides and poultry in staggering quantities. An 1869 article in the Burlington Hawk Eye newspaper reported that Snow & Huber had purchased 11,000 dozen eggs in 15 days, and in one span of seven weeks had shipped 122 railroad carloads of grain, along with several additional carloads of potatoes. Within two years, Snow & Huber quadrupled the number of eggs they bought – an astounding 22,000 dozen eggs were purchased and shipped in a seven day period; all this occurred in the days before refrigeration. In 1873 Snow & Huber placed an order for 300 wagons from a local wagon manufacturer (likely either Buerkens Mfg. or Pella Mfg.). The total amount of business conducted by Snow & Huber is hard to imagine.

At the same time that Snow & Huber opened, McGavic, Wray & Co. opened a large lumber yard one block west of the depot on the northeast corner of today’s South and East First Streets. An 1865 ad listed products including clear planks and boards, flooring and siding, fencing, joists, timbers, shingles, doors, sashes and blinds. One obstacle faced by early lumber yards was convincing customers to purchase “store-bought” lumber. At that time most people were still used to cutting their own timber and hauling it to a local sawmill to have it cut for them. Times change!

Even Snow & Huber wasn’t large enough to handle all the local demand. By 1869 a second commission, forwarding and agricultural company, named Ramsey & Co., had opened. This firm was located on the SW corner of today’s Clark and South Street, where American Wood Fibers is now located. Always smaller than Snow & Huber, Ramsey sold plows, reapers, wagons and cane mills. They were also in the business of purchasing and shipping grain. After a time, Ramsey’s facilities were taken over by Snow & Huber.

Construction was booming in Pella, and especially South Pella. By 1869 a third lumber yard appeared in South Pella, this one operated by Sam Atlee. Atlee’s was located across South Street from Ramsey’s. In 1871 Atlee’s Lumber Yard was purchased by one-time cabinet maker and former miller F. W. Waechter who changed the name to Waechter Lumber Yard. In 1904 the business was moved to the NW corner of Main and University Streets by his son, Adolphus, where it continued to be operated for four successive generations of Waechters.

Also by 1869 the first hotel had appeared in South Pella. The Ohio House was located on the east side of Main Street south of what is now University Street. Mentions of the Ohio House continued to appear in the local newspapers until at least 1886. By 1875 two more hotels had been opened near the depot. W. W. Nossaman operated the larger of the two new hotels, both located across South Street from the railroad depot. The name of the third hotel, which was located east around the corner from Nossaman’s Hotel, is not known. 1875, just 10 years after the arrival of the railroad, found fully 100 residences and business houses located in South Pella, which by then had a population of over 400. By this time, South Pella also had its own school – located on today’s Oskaloosa Street, approximately where Enterprise Rental is situated today. All this business activity happened, in South Pella, in the span of 10 short years. And this was only the beginning of South Pella.

South Pella’s history wasn’t always smooth sailing. Snow & Huber suffered through two disastrous fires. The first fire devastated their facilities in 1871. The story made the front page of the Iowa State Register newspaper (today’s Des Moines Register) for multiple days, with initial details sent from Pella’s nearby depot via telegraph. Snow & Huber soon relocated their business to both sides of Oskaloosa Street on the west side of East First Street, only to have their enormous wooden grain elevator again destroyed by fire in 1887. About this time Charles Snow left the firm before moving to Des Moines. David Huber continued to operate the business, thereafter known simply as David S. Huber. Huber went on to serve as alderman for South Pella and was then elected mayor of Pella in 1903.

The names of Snow and Huber remain familiar to many Pella residents. South Pella’s Huber Street was named in David Huber’s honor shortly after he retired in 1913 after nearly 50 years in business. The Cox-Snow Music Center at Central College is named after Charles Snow’s granddaughter, Queene Snow, and her husband Henry Cox. Stay tuned for more amazing history of South Pella. 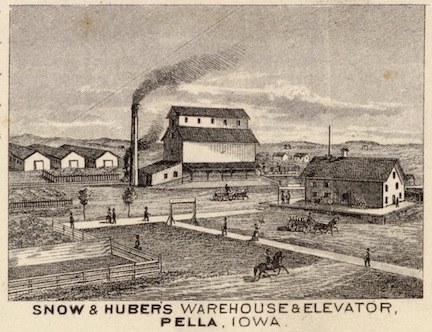 An 1875 sketch of Snow & Huber’s warehouse (foreground) and elevator in the center. The elevator burned in 1887. The elevator was located on the south side of today’s Oskaloosa Street just east of the current railroad depot. The warehouse at the left of the sketch is located on East First Street where De Ruiter Lawn Equipment is now located. 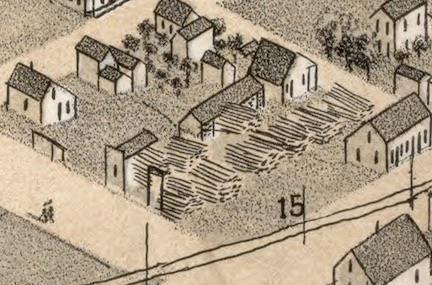 McGavic & Baldwin’s Lumber Yard in South Pella. Originally started under the name McGavic, Wray and Co. in 1865. This lumber yard was located on the NE corner of today’s South and East First Streets. Sketch from the 1869 Birds Eye View of Pella.

The Sam Atlee Lumber Yard as seen in a sketch from the 1869 Birds Eye View of Pella. Two years later this lumber yard was purchased by F. W. Waechter and renamed Waechter Lumber Yard. In 1904 it was relocated to the NW corner of Main & University Streets. 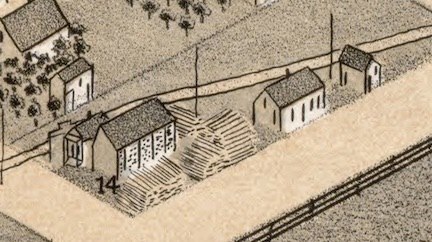 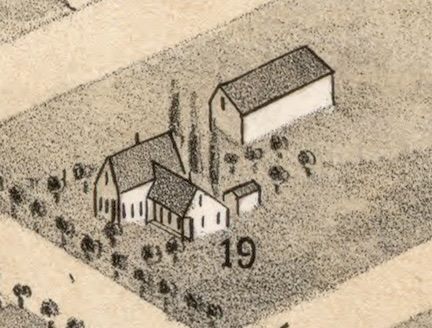 The Ohio House, South Pella’s first hotel, was located on the east side of Main Street south of today’s University Street. Mentions of this hotel were still found as late as 1886. Sketch from the 1869 Birds Eye View of Pella. 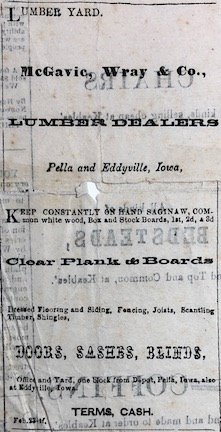 An early 1865 ad for South Pella’s McGavic Wray & Col. Lumber Dealers. By 1869 the firm was known as McGavic & Baldwin. Ad is from the Pella Blade

Breaking news from the Iowa State Register newspaper (now known as the Des Moines Register). Details were telegraphed from Pella’s railroad depot less than a block away. The aftermath of the fire continued to be covered in the Register for several days. From the April 19, 1871 Iowa State Register. 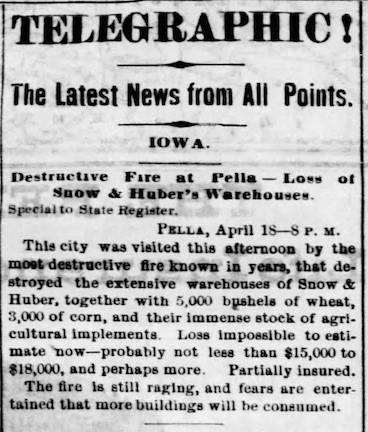 One of Snow & Huber’s very first ads. Taken from an early issue of the 1870 Pella Blade newspaper. From the very first Snow & Huber had an enormous presence in South Pella, and an oversized influence on the city of Pella as a whole. 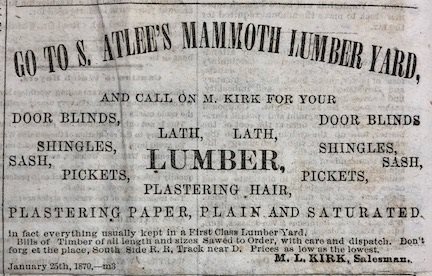 An 1870 Pella Blade Ad for Sam Atlee’s “Mammoth” Lumber Yard. Atlee’s was located on the north side of today’s South Street, west of today’s Clark Street. In 1871 Atlee’s became Waechter Lumber Yard, a name which it retained for nearly a century.

Unique Artifact Given to HPT

Clover Leaf Dairy and a Love That Lasts a Lifetime…