WE GET QUESTIONS. Re: The Dog Statues in front of the former City Hall/Sanctuary Building on Main Street. Many people ask about the dogs and their history. There are a few long-standing urban myths about them, but here is their actual story.

The dogs are original to the building which was erected in 1905 by Herman Rietveld to house his newly-founded Citizens National Bank on the main floor, and the fledgling Pella Chronicle and its printing presses in the basement. The bank opened in January 1906; one month prior Rietveld wrote a 12-stanza autobiographical poem that was published on the front page of The Chronicle. It said (in part):

“There was a man in our town,
H. Rietveld was his name;
His enemies thought they had him down,
But he bobbed up just the same.

He built a bank on Main street;
’Twas full three stories high.
He made the brick himself, you see –
And that’s the reason why.”

It went on to say:

“Two dogs of war adorn the front
Of this wondrous Institution,
But the boys inside will stand the brunt
Of all the persecution.”

Rietveld also owned the Pella Drain Tile factory that produced the brick that was used to erect both this building and more than a dozen of Pella’s most iconic business buildings. He had started a previous bank, the People’s Savings Bank that had failed two years prior – although he worked to pay back all the creditors before this bank opened.

To keep a potentially very long story short, we will simply say that Rietveld considered the dogs to be “dogs of war” that were installed to guard the bank from Rietveld’s “enemies [who] thought they had him down”.

Rietveld paid $120 for the dogs and they were named Vertrouwheid, the sleeper, and Waaksaamheid, the watcher.

Much could (and should) be written about Rietveld. From the early 1890s to nearly 1910 he was responsible for the construction of dozens of homes and business buildings in Pella and Harvey. He was a person that made and lost multiple fortunes. Born near Pella, in his long life he lived in Fairfield (IA), California and Washington as long as he lived in Pella. He ultimately moved back to Knoxville where he passed away at his daughter’s home in 1959. He is buried in Oakwood Cemetery.

In early 1910 the Citizens National Bank moved to where Marion County Bank is today. Within a few years the building was purchased by the city for use as its city offices. In the meantime the building was home to a restaurant, a millinery and chiropractic offices. If you walk through the alley north of the building you can find many bricks that contain the stamp: “Pella Drain Tile, Pella, Iowa”. 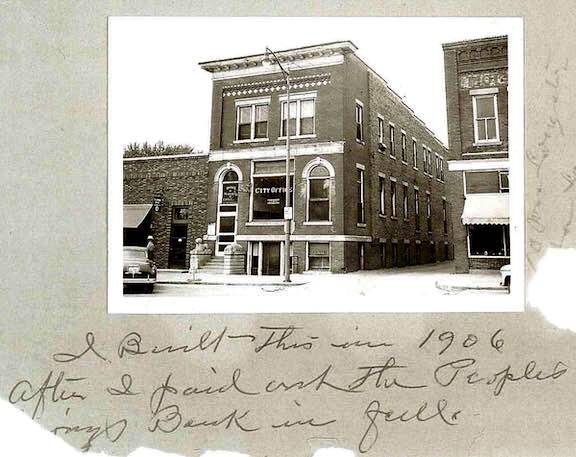 A photograph (taken later in the 1940s/1950s) from Herman Rietveld’s scrapbook with his handwritten note: “I built this in 1906 after I paid out the People’s Savings Bank in full.”

Herman Rietveld’s December 1905 poem describing his new bank, some of the persecution complex he was feeling, and his hopes for the bank’s future. The bank opened one month after this poem was published.