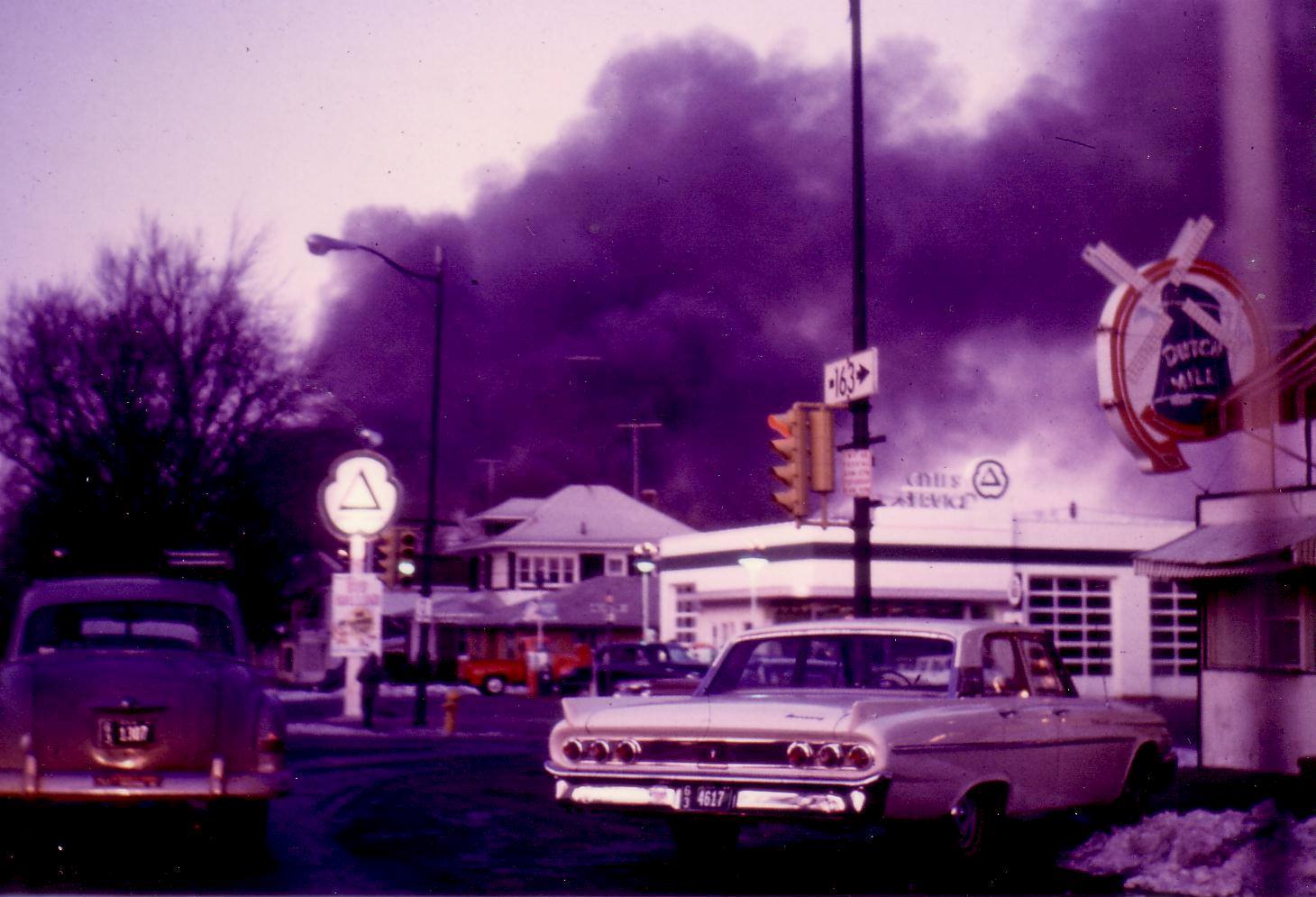 While I was working on the Cloverleaf Dairy story, we discovered that there was a connection with it to the ice-cream stand on Washington and Main Street.  Bruce Boertje shared a couple of photos for the story and one included the sign on the ice cream shop. In the back ground of that photo was the smoke from the Christian High School fire. The school was located on Jefferson Street at that time, just a block or two east of Main.  So for the dairy story I cropped out most of the background, just showing the sign. I felt the whole picture deserved to be featured along with some memories of this devastating event.

Fifty-five years ago this past January there was the huge fire that destroyed Pella Christian High School.  It happened after school on a Wednesday afternoon, January 15, 1964. Basketball practice was going on in the gym and there were a few teachers still in the building. Manuel Cedre, the custodian’s son, was the first to notice the smoke. The Cedre’s were a refuge family from Cuba. Louis Cedre, the custodian pulled the fire alarm and checked the kitchen but the fire wasn’t there. Manuel and Louis went into the gym to get the coach, Richard Vander Laan.

I talked to Dick Vander Laan on the phone. He recalled how he was coaching basketball practice in the gym when the Cedre’s came to get him because of smoke coming from above the lockers. Dick opened a locker and smoke poured out. He rushed into the office and got on the intercom to tell everyone to leave the building! He also called the fire department. Dick said they checked the kitchen but it was just smoke and no flames. The fire seemed to be above the kitchen/ home economic room in the ceiling. The fire spread quickly through the school’s ceiling in just four to five minutes. Jay Veldhouse and several other teachers were in the teachers lounge. Jay’s hair was singed from the intense heat trying to get out. Dick recalls standing out in the January cold with the team in gym shorts and tee-shirts. He said he remembers the west door exploded open from the heat and flames shot out of it “that seemed to reach all of the way to Main Street”. It was an intensely hot blaze and black smoke covered the whole neighborhood.

The entire older section of the school building burnt to the ground. There was an addition put on in 1958 that remained but it had significant damage from smoke and water. Mr. Vander Laan remembers the fire spread with such speed that in just a few minutes smoke filled the halls. Dick said if all the students had been inside they may not have been able to exit before being overcome by the smoke.

Dick said it cost considerably more to rebuild  a new school than what the school was insured for. This was mostly because there were newer building codes that would prevent a fire from spreading like it did in this older building.

I asked Doug Van Gorkom, Pella Fire Chief, if anyone on our current fire department had fought at that fire. He said no, he was a sophomore at Pella High School at the time. He was also having basketball practice and the team went outside to see the black smoke on the north side of town. Doug has been on the Pella Fire Department for 45 years.

If you enjoyed this post and would like to help with future Historic Pella Trust projects please consider making a donation. Contributions to the Historic Pella Trust are critical to preserving the rich and storied heritage of Pella and its architecture. To make an online donation, please go to the Membership and Donations page. https://historicpellatrust.org/membership-and-donations/ 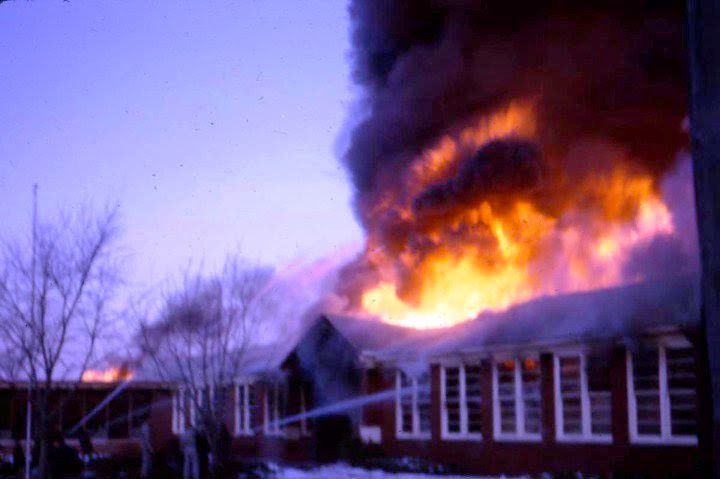 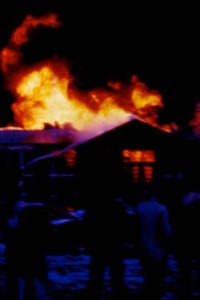 Two color photos came from Jenny Harmeling Messer. Bruce Boertje and Jenny were next-door neighbors.  He stated that the fire was basically in their backyard.  Bruce said that Jenny recalls firemen standing in their sandbox with hoses ready to protect neighborhood homes. 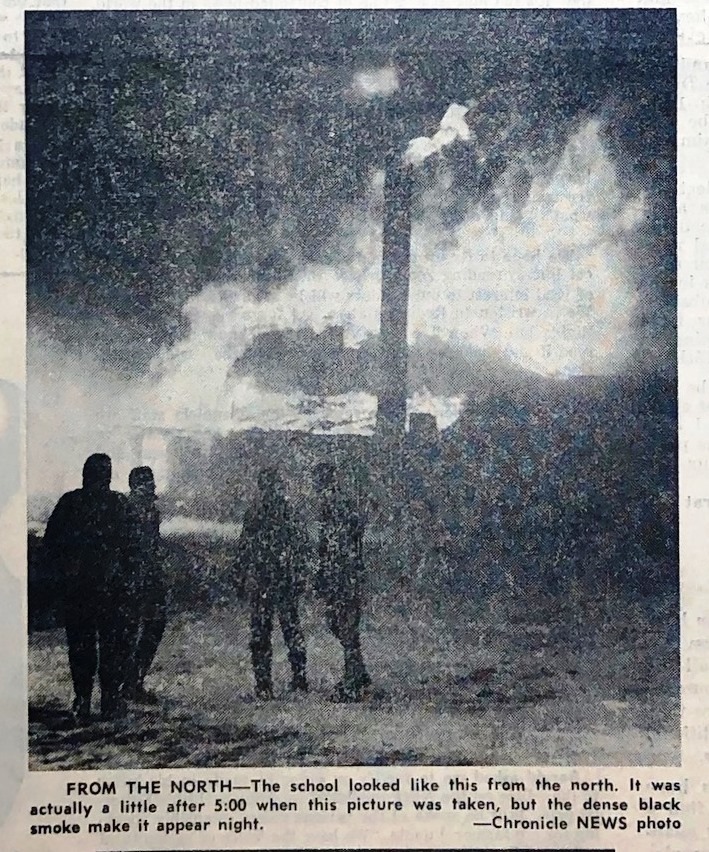 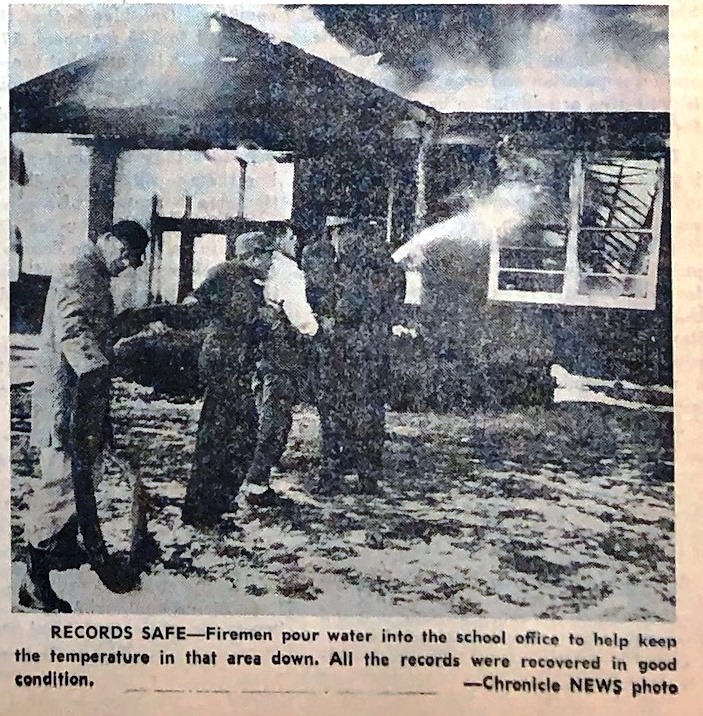 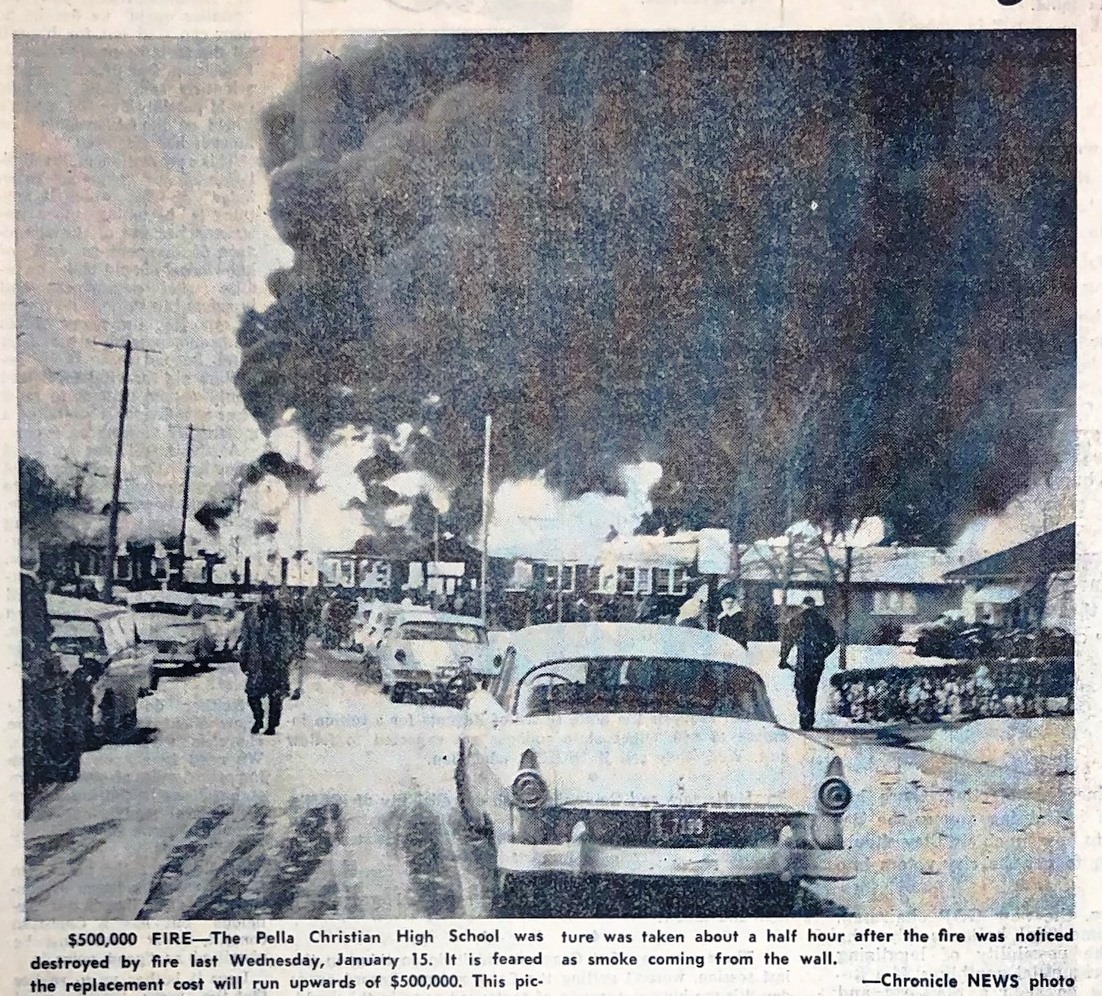 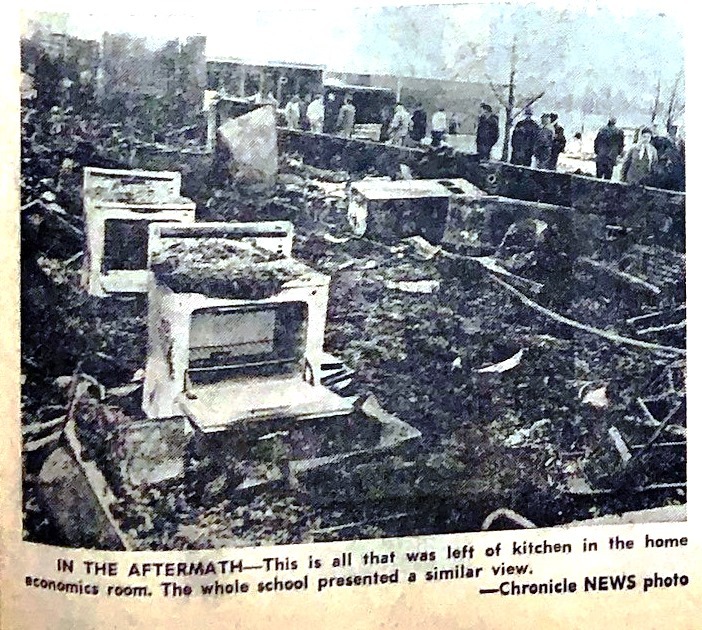 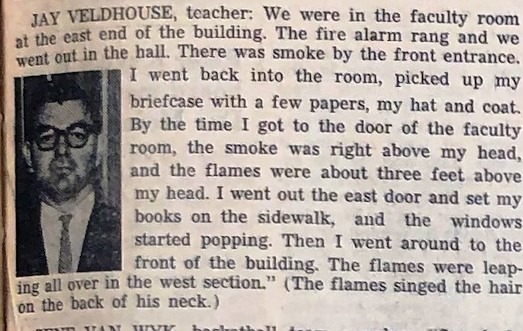 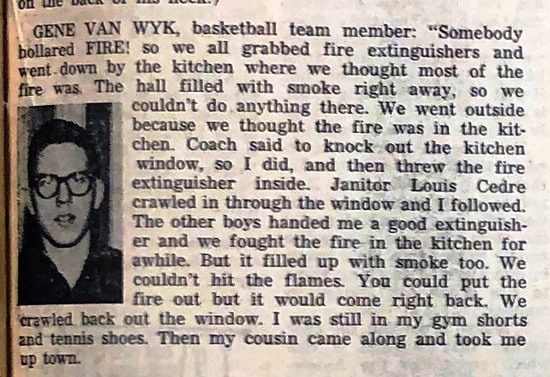 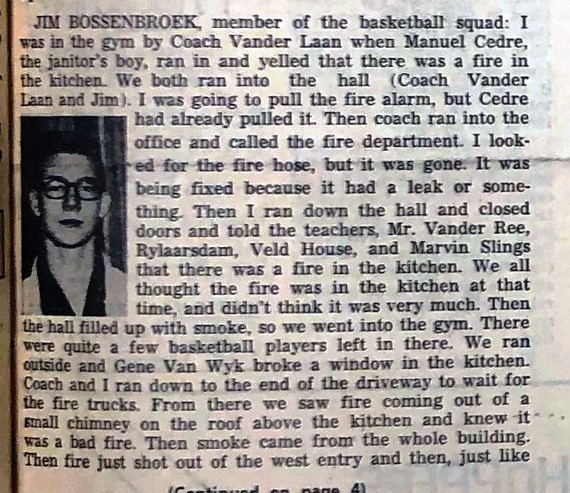 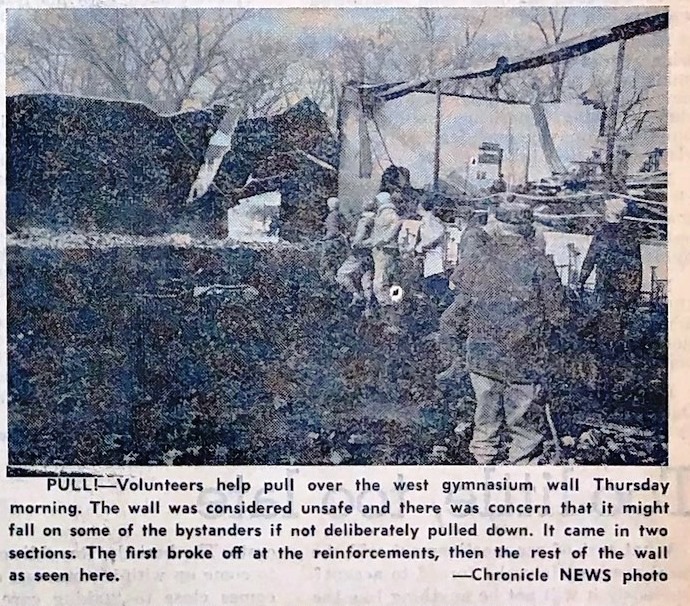