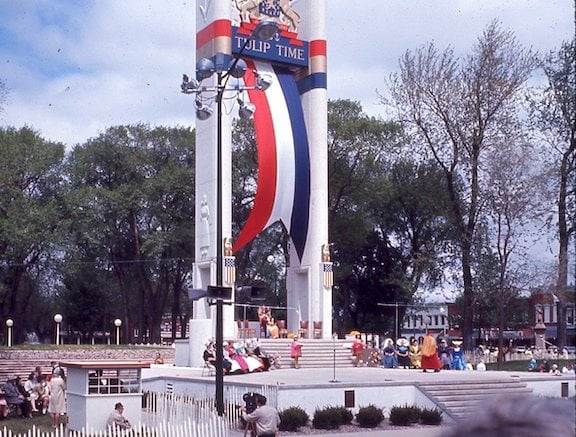 The Historic Pella Trust’s mission statement: To protect and promote buildings, landscapes, and sites important to the heritage of Pella, Iowa.This week’s feature is the Tulip Tower, or “Tulp Toren” (which is the Dutch spelling) as it was originally called. Many people know that the current tower is a replica of an earlier tower. However, a little additional history behind the tower might prove interesting.The original Tulp Toren was constructed in 1940. It stood 70 feet tall and was constructed largely of wood. It stood closer to the west side of the square, facing southwest, looking towards the post office (see aerial photo below).Pella’s first Tulip Time festival was held in 1935 and the one-day program was held downtown. Starting in 1936 a stage in West Market Park was used for many of the festivities, including Tulip Time operettas and the crowning of the Tulip Time Queen. The stage and surrounding area was dubbed the Tulip Bowl.In 1940 the front page headline of the Pella Chronicle newspaper read: “Plan Different Entertainment for Tulip Festival” – “More Entertainment for Visitors With Less Work” – “Propose Platform and Towers in Central Park to Keep People in the Downtown Area”. The article started out by saying: “Revolutionary changes were proposed to the men and women of the Tulip Time committee by the Historical Society at a dinner tendered by P. H. Kuyper [Pete will reappear in this history] at Tulip Cafe…. The plan is to bring the entertainment to Central Park.”Noted New York City architect and Pella native John Lautenbach designed the stage. He, along with his brother Charley, who was a local contractor, were in charge of erecting the tower. On April 4, 1940 the Chronicle noted that “John Lautenbach is using the vacant Benteco store building [on the east side of the square] for drawing the sketches of decorations to appear between the pylons in Garden Square at Tulip Time. As fast as he completes a section George Heeren takes it down to his shop and starts work on forming it from wood. The whole decoration represents the coat of arms of the Queen of The Netherlands.”The tower itself was constructed laying flat on the ground in Central Park. One week before Tulip Time, the tower was complete and ready to be lifted upright. Unfortunately,in the process it slipped and fell, and “was quite badly shattered.” Some were ready to concede defeat but after two days of hurried repairs the tower was successfully lifted into place.The tower was originally designed to be used for only one Tulip Time festival, but it was so successful that citizens raised sufficient funds to preserve the tower for another year. Ultimately, the tower was stretched to last for three Tulip Times, but was then deemed unsafe and was demolished after the 1942 festival.25 years later, Pete Kuyper, along with his wife Lucille, offered to pay the costs to have the city erect a permanent Tulip Tower. Work on the current Tulip Tower was started in 1967 and it was dedicated on May 11, 1968.Pete was the owner and president of Rolscreen Corp. (now Pella Corp.) and had a keen interest in Pella’s heritage. Pete passed his love of Pella’s history down to his two children, Stu and Joan. All three were involved most of their lives with Rolscreen/Pella Corp. and those two generations helped preserve many of Pella’s historic landmarks, including Pella’s original fire station, the Pella High School/Community Center building, the former Strawtown Restaurant building as well as several vintage/historic homes. Stu even provided the original idea for a canal in Pella and was instrumental in starting the Dutch Front Program.Sixty-three years later the Tulip Tower is an integral part of Pella’s downtown and is one of the most iconic structures in town. Without Pete and Lucille Kuyper, and their love of Pella’s heritage, our community would be much poorer.  By Bruce Boertje 7/25/2021