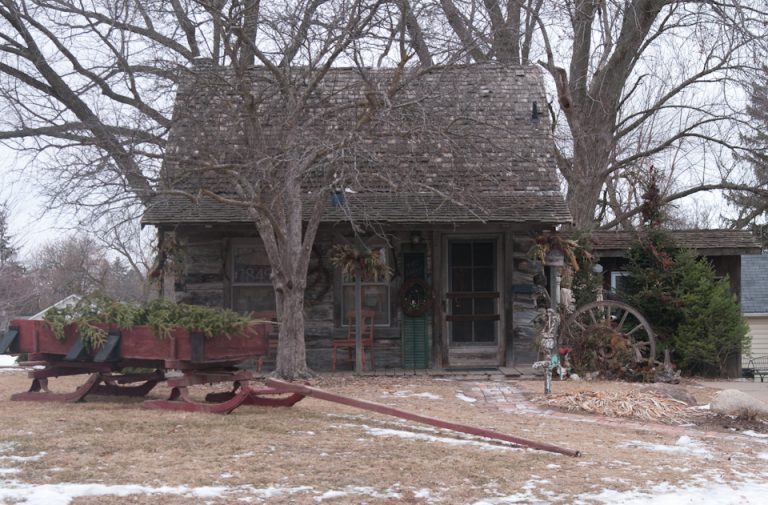 The Thomas F. and Nancy Tuttle Log House, locally known as the “Tuttle Cabin,” is the oldest building in Pella. It served as the birthplace of the city of Pella, Iowa, in 1847, when Dutch colonists, under the leadership of Dominie Henry P. Scholte, chose Marion County as the location of their new home. Scholte, and his team negotiated – at the Tuttle Log House itself – the purchase of the Tuttle farm to be the site of their settlement-the city of Pella.

The Thomas F. and Nancy Tuttle Log House is a wood, 1.5 story “single-pen” (one room dwelling), originally constructed in 1843. The log house was built by Thomas F. Tuttle at the age of 36. Mr. Tuttle was born in 1807 in Canada and came to Iowa Territory in 1838 at the age of 31. He and his wife Nancy built the log house as a farmhouse for a homestead claim. H.P Scholte bought the log house and farm in July of 1847. Nearly two years before his death on August 25, 1868, Scholte finally sold the log house on November 14, 1866.

Tuttle had also built another log house located on Pella’s “Garden Square” (Central Park). This was claim pen cabin. The Scholte family lived in that log cabin from November of 1847 until April of the next year, while their new home was being constructed. This log cabin structure survived until after the Civil War.

The Thomas F. and Nancy Tuttle Log House walls are made of square hewn, walnut logs about 6 x 6 inches. The walnut timber was felled from a virgin forest situated in the 1840s just to the north of the property.

Log houses were intended typically as a first dwelling until a more substantial home could erected because they only provided basic shelter against the elements. In contrast, the Thomas F. and Nancy Tuttle Log House has provided domestic shelter in Pella for more than 170 years. The longest occupants, the Sneller family, occupied the property from 1912 to 1973. During this time residential development occurred all around the building. Had the frugal Sneller family not lived here, this modest house might well have been razed and the site redeveloped.

In 1973, Robert Van Vark of Pella, purchased the property at auction and his daughter, Gail Van Vark Kirby, inherited the property from him. The Historic Pella Trust was honored to be able to purchase the property in April of 2015.

A Place To Call Home; by Rachel Line and Sallie DeReus